Perrego found himself the beneficiary of being the last person to draw for starting positions after finishing third in the final heat race, and that was lucky for him as he was able to secure the number two position for the 60-lap Modified main…right along side Ronnie Johnson.

Then, he worked over the #2RJ for the entire race, and was able to take the top spot as the drivers came to the white flag. He then went on to capture the win and the $7,500 top prize that goes along with it.

However, it wasn’t just the good starting position that was key to Perrego’s success. Choosing the right line on the track made all the difference as well.

“Early on, Ronnie and I were just rippin’ around the outside,” Perrego said. “I gained on him a bit and then he started to pull away, so I started to search around the track. I wasn’t catching him but then we started to get into lap traffic and I could really start to roll him in. We almost snuck by him and then the caution came out.”

That caution tightened the field up but made Anthony run the outside for a few laps. That line didn’t work as well for him.

“A lot of those quick yellows were hurting me to start on the outside,” he said. “I wasn’t as good as he was out on the cushion so the more patient I was around the bottom was the key for us.” 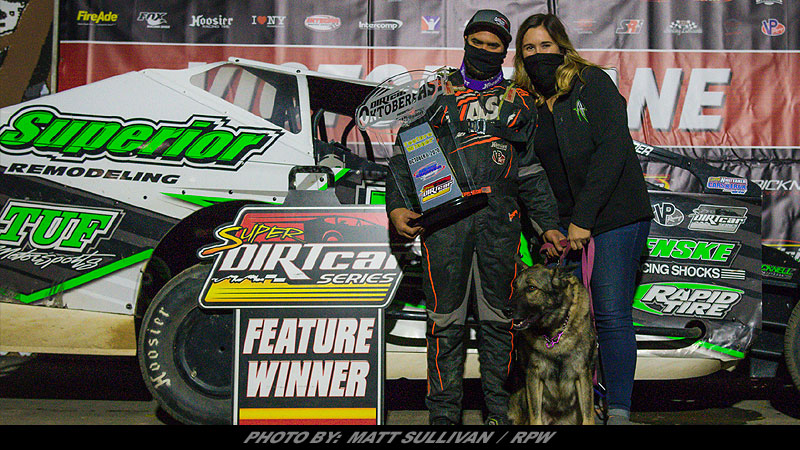 The track started to take rubber from the get-go in the 60-lap main event. With the surface getting extremely black and slick in the middle, drivers were either going to the extreme outside or hugging the inside jersey barrier, trying to find any type of traction.

Perrego was one of those drivers.

“It got kind of dirty with loose stuff right in the middle,” he said. “With everyone going to the bottom or the top, as we get to lap traffic, it seemed that those guys were migrating to the middle and they started to clean it back off.”

Compared to previous seasons, promoter Lyle Devore removed the infamous yuke tires in exchange for an inside wall through the corners. Perrego actually found this to be beneficial.

“For the track conditions, I think that inner barrier kind of helps this place,” he said. “To keep the track clean, instead of people going down to the bottom, cooking their left rear in the loose stuff, kicking it back on to the racing surface, and knocking the crap out of the track.”

Longer runs between caution flags were also a key to Perrego’s success on Tuesday night.

“With those short runs, firing off on the outside, Ronnie could get some good grip down the straightaways,” he said. “That kind of helped him to get a lead out by two or three car lengths. We needed to get to the line I wanted to run.”

Now, teams head to Utica-Rome Speedway on Wednesday night for Big Block Modified, 358-Modified and Pro Stock action before heading to the Fulton Speedway on Thursday. However, you won’t see the #44 on Fulton’s high banks.

“We’re going to Utica with the Big Block and the Small Block, take off Thursday, Can-Am Friday and then that’s it,” he said. “This whole week is a lot. We’re doing what we want to do.”